With the weather warming up, I've been on quite the burger kick lately. Living in New York, you don't get to enjoy a good BBQ all that often, so I rely heavily on restaurants to fill that burger void in my life. Last July 4th weekend some of our friends introduced us to the Baroness in Long Island City and it's become a favorite burger and beer spot.

Last Friday night, one of those burger cravings hit big time and my boyfriend and I decided to venture over to the Baroness during happy hour. I usually say that appetizers are a must have when I go out to dinner, but in this case I wanted to save as much room as possible for the main course. Despite their lengthy menu of gourmet burgers, the Baroness keeps it simple in their ordering process: pick a burger and pick a side. Their list of sides ranges from simple homemade kettle chips to gourmet jalapeno bacon mac n' cheese. No matter what you're craving, the combination of burgers and sides is sure to hit the spot.

Now onto our meals. I was stuck deciding between The Wanda for the creaminess of mushrooms and sauteed onions or The Judith for the perfect bacon burger. I decided to go with the best of both worlds and add bacon to The Wanda. Since I really loaded up my burger, I decided not to go with one of their heavier sides and just got kettle chips. My burger came out fairly quickly and was piping hot when I cut into it (they're so loaded that it's nearly impossible to pick the whole thing up). It was exactly what I was craving--the provolone, mushrooms and caramelized onions provided that creamy, umami flavor I was looking for and the savory bacon and spiced burger prevented it from being all one note. The kettle chips were a great complement to the burger, as they were crisp, salty and well-spiced. 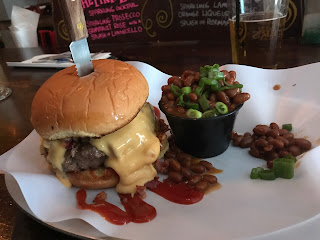 My boyfriend went with The Marylin burger, which is a beef/bacon patty, stuffed with mac n' cheese and topped with pancetta, bacon and beer cheese. Talk about a burger. He got the bourbon baked beans as a side because what goes better with mac n' cheese than baked beans? Luckily, they arm you with a steak knife when your burger comes out, as he also had to cut his in half to manage eating it. The presentation of his burger looked amazing, with the beer cheese dripping off the burger and the baked beans perfectly flowing out onto the plate. I didn't get a chance to try his burger, but he raved about it. I did, however, get to try the baked beans and they were the perfect amount of sweetness to balance such a savory burger.

Overall, the Baroness is one of my favorite burger spots in all of NYC. The burgers are incredibly filling, so make sure to show up hungry. Beyond the food, the atmosphere is a great find in a part of the neighborhood that's otherwise a bit (no pun intended) barren. They have a great beer selection, though they don't serve any standards, such as Budweiser or Coors, and they don't have a fryer so don't expect to get french fries with your meal. Some would say that these sorts of rules can make a bar feel pretentious, but somehow the Baroness feels genuine and welcoming. The bartenders are friendly, polite and always willing to give you a recommendation. Long Island City is just one stop outside of Manhattan and the Baroness certainly makes it worth the trip!