Between the renowned Greek food of Astoria and the amazing dumplings in Flushing, Queens has always had a thriving food scene. That's why it's not all that surprising that this is my third Queens review in a row! Citi Field has built a reputation for itself in the food world over the past few years, bringing in local vendors to supplement the regular hot dog and french fry vendors. Over the first few weeks of this season, I've tried a few of the brand new and not-so new food options offered at the field.

This isn't Fuku's first season at Citi Field, but the lines were so long last season that I could never quite bring myself to wait. However, this year I decided that I needed to try their sandwich no matter what. I waited in line for about a half hour for that famous Spicy Fried Chicken Sandwich during Opening Day this year (the perfect amount of time to drink a beer while you wait FYI). The wait was well worth it. I got their signature sauce as a side, which had the sweetness of a BBQ sauce, but the heat of a hot sauce. I only had to use a dab here and there because the the sauce was so flavorful that the heat remained on my tongue between bites. The chicken itself was crispy and spicy on the outside and perfectly juicy on the inside. The pickles and bun complemented the chicken and helped take down some of that heat.

I also tried the Fuku Fingers at a recent game. I have to say that given the choice, I would go with the sandwich every time. The Fuku Fingers have that same amazing spice and crispiness, but without the pickles and bun they kind of fall flat. Compared to regular chicken fingers, these are way above average, but the sandwich is so much better for just a couple dollars more. 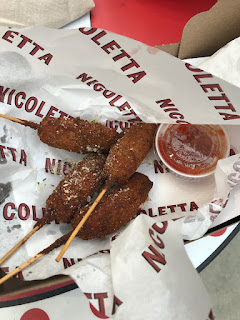 When I first heard the words "Pepperoni Mozzarella Sticks" my mouth started watering. I made it my mission to give those a try as soon as possible. The line for Nicoletta was extremely long on Opening Day, so I decided to wait to try them until a less busy night. We recently went to a game on a chilly evening and I decided that it sounded like the perfect opportunity to enjoy some piping hot mozzarella sticks. The stadium was pretty empty because it was a cold weeknight, so I was only the fourth or fifth person in line. I waited about 10 minutes to place my order, but little did I know that my waiting was just beginning. Service was extremely slow for both ordering and picking up food, all four people who had ordered ahead of me were still waiting when I finally placed my order. I then spent an additional 20 minutes (seriously...I looked at the time the receipt was printed and the time when I received my food. It was a full 20 minutes) waiting at the counter for my food to come out. I had only ordered the pepperoni and mozzarella sticks so I was surprised they didn't have some under the heat lamp ready and waiting to go. There seemed to be some form of management personnel back in the food prep area, so I'm wondering if they're still working out their ordering and prep times. 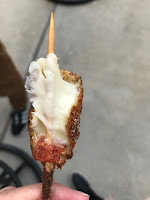 Anyway, when my food finally came out, I couldn't wait to devour it. The mozzarella sticks looked piping hot, perfectly brown and were sprinkled with fresh parmesan. When I first bit into one of the mozzarella sticks, I was pleasantly surprised by how fresh the cheese was. However, the pepperoni was nowhere in sight, bite after bite. I finally reached the bottom of the mozzarella stick and found one lone, tinyyyyy piece of pepperoni. Convinced that this was some sort of fluke, I eagerly bit into the next one. Same thing. Despite their name, these mozzarella sticks barely have any pepperoni inside. I was utterly disappointed after my extensive wait. I would be willing to give them one more try to see if they've resolved their issues, but I'm not hopeful. 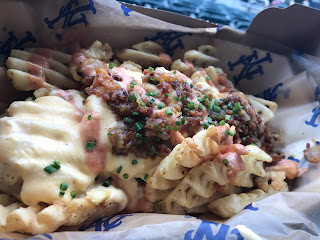 I have saved the best for last. My boyfriend was really disappointed to hear that his favorite sandwich stand, Pressed, wasn't going to be there this year. He had fallen deeply in love with a short rib grilled cheese and was heartbroken that he wouldn't get to enjoy it this season. There was a silver lining: the same chef, Josh Capon, had opened a new burger stand. Even better news? Josh Capon is the same chef behind Burger & Barrel (see my earlier review here). We decided to try it out during a busy Saturday afternoon game and were pleasantly surprised by how quickly the line moved.  Knowing how filling my trip to Burger & Barrel was and the size of the short rib grilled cheese, we opted to split the Bash Fries and the Double Barrel burger. The Bash Fries were un.be.liev.able. The waffle fries smothered in bacon, onion jam and "special sauce" are so loaded that they give you forks right when you order them. I fell in love at first bite and can't wait to go back and have more. The sauces are sweet, savory and unlike anything I've ever tried before. 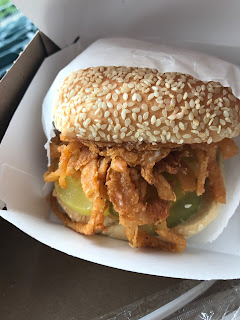 The Double Barrel burger was a few notches up from a standard higher-end fast food burger (e.g. Shake Shack). The two patties were salty and very well-done. The patties had that typical fast food flavor, however, the fried onions and pickles on top really elevated the flavors and made the whole burger worthwhile. I think next time we would opt for the Bash Burger, which is a single patty smothered in the same sauces as the Bash Fries.

Overall, Citi Field has some exciting new options this year that are far from standard ballpark fare. I'm looking forward to trying out even more of the top vendors as the season goes on! Have a suggestion for what I should try next? Leave a comment below!