My latest review is of Burger & Barrel in SoHo. I wanted to take my friend out for a birthday dinner and try somewhere neither of us had ever been before. He was craving burgers, so we considered some of NY's most famous burger joints, like Black Tap and Salvation Burger, but eventually landed on Burger & Barrel due to their wide variety of burgers and small plates. 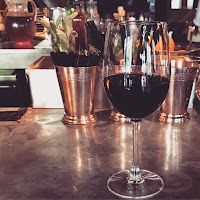 I got there a bit early, so I grabbed a quick glass of wine at the bar for happy hour. The hostess was then kind enough to seat us at a large booth in the bar area so that we could continue to take advantage of the happy hour drink specials. My friend and I decided that there were too many things we wanted to try, so we split a small plate, a burger and two sides.

First up, the small plate of Chicken Lollipops. Unfortunately, I let myself get so hungry that when the waiter set these down I inhaled a couple of them before remembering to take a picture. We opted for the buffalo chicken version of the lollipops and to be honest, I was not that impressed. They reminded me a bit of Applebees boneless wings, which completely have their place and time, but I was hoping for something a bit more original. That being said, it did satisfy a buffalo chicken craving, but they were just nothing special. 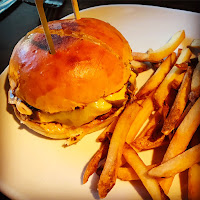 Next up, the BMC burger. We had informed the waiter that we'd be splitting everything, so the burger arrived pre-cut for us, which was a major plus. The burger was so cheesy and gooey that I think we would have just destroyed it in an attempt to cut it in half. The BMC burger comes with tomato aioli, raclette cheese and griddled onions. The combination of the raclette and griddled onions is what made the burger so gooey. The burger was absolutely delicious and savory, but I think it could have benefitted from a bit of crunch. We had it cooked medium, so between the beef itself, the creamy cheese and soft onions, the texture of the whole thing became a bit monotonous after awhile. Perhaps if we had added bacon or fried onions that would have given the burger that extra oomph it needed. It was quite rich, so I'm glad we opted to split the burger because I don't think I could have made it through the whole thing alone! I also wish we had upgraded the side of fries for their more flavorful truffle fries. The fries we did get were the perfectly crunchy restaurant fries you expect, but I just wish we had gone all out and upgraded. 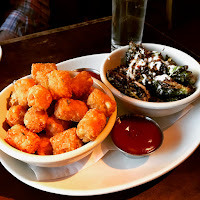 Finally, the sides. We opted for a side of Rosemary Tater Tots and Brussels Sprouts. These two were the true all stars of our meal. Honestly, had I been making my own decisions about sides, I probably never would have chosen these two. However, it was my friend's birthday so I let him take the reins on the side choices and I'm so glad I did. The tots were slightly average in appearance, but once you bit into them they were savory, flavorful and had the perfect texture; the outside was crunchy and the inside was potato-y soft. I can usually take or leave tater tots, but these are a must-have next time I return. The rosemary flavor was evenly distributed throughout and wasn't at all overpowering. The Brussels Sprouts were also perfectly flavored. The sprouts were cooked with pancetta and pecorino and the bitterness of the sprouts, mixed with the salty and savory pancetta created a perfectly balanced dish. They were also cooked crispy, which made the bite into them so satisfying. Again, these are a must-have next time I go back.

Overall, I was impressed with our dining experience. The entire ambience of the restaurant felt like a high-end pub and the waitstaff were friendly and attentive. My friend and I stayed for a couple after dinner drinks in our booth and we never felt neglected or rushed. I'd absolutely recommend it to a friend looking for a casual dinner with a higher end feel. Next time, I'd like to try one of their other burgers (Bash burger...I'm looking at you!) and perhaps a different small plate, but I'll likely stick to those tots and sprouts for sides.