It's been awhile since I've had time to make an entry.  I just finished up school, started a new job, and moved, so I haven't had much time to devote to blogging lately.  Luckily, that doesn't mean that I wasn't trying new places and taking down notes for future blogs.  I figured I'd start with one of the places I've visited most recently and work my way back so that I can revisit some of these locations and write an even more-detailed entry.

This past Friday night I visited Sriracha for dinner around 8:30pm.  I had a work event that went a bit later than I expected, so I wanted to go somewhere that wouldn't have a long wait and could get my entree out pretty quickly.  I had passed Sriracha a few times in the past, so we decided to stop in.  They were able to seat us right away and I would say the restaurant wasn't even half full.   It took a bit for a waiter to come by our table, so by the time he got there we had already picked out our drinks, appetizer and entrees.  He took our order and our drinks came out pretty quickly, but that's when the waiting started.  We were sitting there for quite awhile and our appetizer and waiter were nowhere in sight. About 20 minutes later, a food runner came out with our entrees.  It took our waiter about 5-10 minutes to check on us once we got our entrees, at which point we informed him that our appetizer had never come.  He laughed as if it happens all the time, but then our appetizer came out about 10 minutes later...halfway through our dinner.

Before I get to the food, I'll continue on the subject of the experience itself.  The ambiance of the restaurant was a bit confusing.  From the outside it seemed a bit like a lounge, but on the inside it reminded me more of a dive bar with asian-themed decor.  Overall, it seemed much more like a bar than a restaurant even though the bar area itself was extremely small.

Now, onto the food.  For an appetizer (which we got halfway through our meal) we ordered the spring roll sticks.  The order only came with three sticks and they were a bit greasy and overall unimpressive. 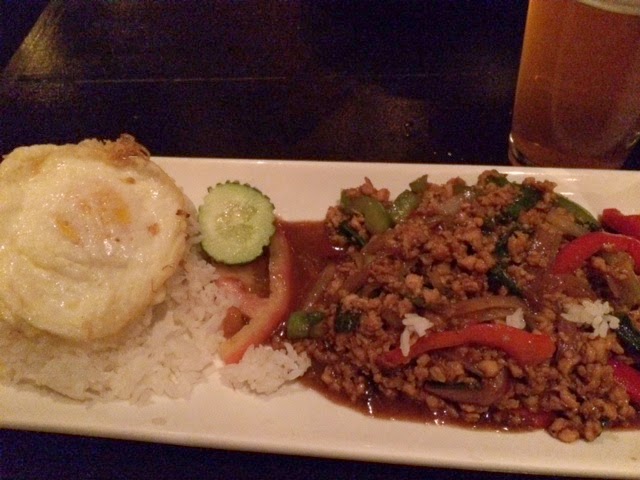 For an entree, I ordered the Thai Basil Chicken.  The entree itself was simply OK.  The chicken was ground chicken and a bit dry and I wish the fried egg had been mixed into the entree itself instead of just sitting on the side.  I probably wouldn't order this entree again only because there was nothing exciting or interesting about it.  My boyfriend ordered the Thai Drunken Noodle.  He really enjoyed his entree.  I got try a few bites and I have to say it was one of the better drunken noodles I've tried.  Overall, the restaurant struck me as the sort of place that I would rather get take-out for late night food than go out for dinner there.  I'd be willing to give it another try, but there seem to many other thai restaurants on the upper east side that I'll try before returning here.