Last weekend my friends and I headed into New York to have a nice relaxing brunch and exchange our Christmas presents.  We were a bit worried about some brunch locations being packed because of the holidays so we made a reservation at Diablo Royale about 3 weeks in advance for 11am.  We arrived a bit late due to some train delays, so by the time we got to the restaurant it was 11:15.  When we walked in we were immediately told the restaurant wasn't open until 11:30 and to come back then. We all thought that was strange, particularly because I was able to pull up the email confirming the reservation I had made, but we decided to walk around for 15 minutes in the rain until 11:30.  We came back at 11:35 and were told that there was some "kitchen drama" and they had no clue when they would open or be able to serve food.  We decided not to dine there because some of us had plans for later in the day and couldn't afford an unknown time schedule.  I was pretty disappointed by the service at Diablo Royale and wouldn't even give the place a second try because of the way we were treated. Now we were stuck in a pretty tough situation given the circumstances: we were all on a budget and were planning on the $25 entree + bottomless drinks deal at Diablo Royale, one of the people I was dining with is gluten intolerant, it was now raining pretty hard and we were all lugging around Christmas presents, and none of us were too familiar with the West Village.  We all tried to use Yelp to find something in the area, but we always ended up rejecting a place because it was too far, not gluten-free, too expensive, or didn't offer brunch.  Finally, I suggested we check the place directly across the street from Diablo Royale to see if they offered brunch because it was also Mexican cuisine which tends to be naturally gluten-free.  I googled the name of the restaurant and the term gluten-free and luckily the website popped right to the top stating that they offer many gluten-free menu items AND they serve brunch.  So we had found our new brunch place!

Brunch at Empellon didn't start until 11:45, so we got there right as the place opened.  The decor and tables inside were really bright and clean looking and the staff was immediately welcoming.  It was practically noon, so we decided to go right for the chips, guacamole, and two salsas combo to share because we were all pretty hungry by this point.  My friend told the waiter about her gluten allergy and he was extremely knowledgable about the menu, explaining which dishes were gluten-free and which dishes could be altered to be made gluten-free.  He spent a few minutes going over the menu with her to make sure she was comfortable with what her choices were.  The chips, guacamole, and smoked cashew and arbol salsas came out pretty quickly, as did our bottle of champagne and carafe of orange juice to make mimosas. 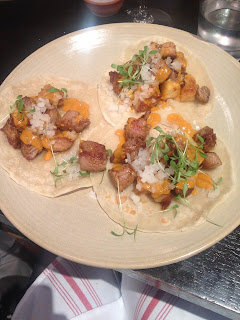 The salsas were unlike any salsas I had ever tried before.  I wasn't immediately a fan of the smoked cashew salsa and the arbol salsa was a bit too spicy for one of my friends. However, I quickly discovered that if you mix the two together it has an amazing spicy, smoky flavor.  The guacamole was also really fresh and delicious, with just the right amount of seasoning in it.  We went through a couple bowls of chips rather quickly...

For my brunch entree I got the pork shoulder tacos.  I had my heart set on huevos rancheros, but unfortunately they didn't offer them.  I can be pretty particular about how my eggs are cooked, so I opted to get tacos instead of any of the egg dishes. The pork shoulder tacos were so rich and flavorful, I had no regrets about not opting for one of their many breakfast dishes. The rich, salty flavor of the pork shoulder was complemented by the sweet roasted pineapple and the bitter chopped onions. Additionally, I'm not sure exactly what sauce was drizzled overtop of the tacos, but it also had a spicy, smooth flavor that really added to the tacos.  Unfortunately, I didn't get to sample any of my friend's dishes, but everyone left extremely satisfied and happy that our bad luck at Diablo Royale had landed us here instead.

I would recommend Empellon to anyone looking for delicious, decadent Mexican cuisine.  We did end up spending a little more than we had originally planned, but it was well worth it.  The overall atmosphere of Empellon was a bit lounge-like, particularly because of the loud music that was playing and because of this I imagine it is much more of a nightlife location.  I'd gladly return for dinner to try out more of their dishes.