Over this past summer the Italian Pantry Bistro, which was one of my favorite restaurants, closed for a few weeks for renovations, but when they reopened they had done an entire transformation.  The Italian Pantry Bistro had become Urban Burger.  I was actually pretty upset to hear that the owners had decided to go a different direction, but I'd been hearing great things about Urban Burger over the past few months so I decided to give it a try.  My boyfriend and I had plans to go see Catching Fire at 8:50 in the next town over, so we figured we should go get dinner around 7:15 to play it safe and make sure we gave ourselves enough time to eat, park, get tickets and find seats.  Turns out this was waaaay too much time to leave.  When we got to Urban Burger we found out that it wasn't wait service, which I was a little disappointed about.  We perused the large menus hung on the walls and then walked up to the counter to place our order.  I got the Speedy Gonzalez, which was a chorizo-seasoned patty topped with pulled pork in BBQ sauce, apple slaw, and gruyere cheese.  My boyfriend ordered the Liberty Bell, which was a patty topped with grilled peppers and onions, provolone cheese, and garlic mayo. We also decided to get a side of fried pickles because: why not? 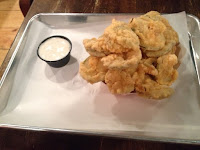 After we ordered at the front counter, they gave us a number to put on our table so that they could bring the food out to us.  Our fried pickles came out first.  In my opinion, fried pickles only come in two varieties: awesome or you did something very wrong.  These fried pickles definitely fell into the awesome category.  The buttermilk ranch was delicious and the pickles had just the right amount of batter on them.  I also proceeded to use the ranch to dip my french fries in, which was also awesome. 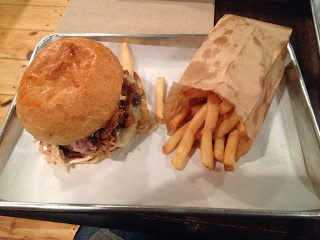 Our burgers came out just a few minutes later, so we didn't have time to finish the fried pickles before we started our burgers.  Now, I need to be up front about something here.  I was just recovering from a cold that had me pretty congested, so I'm afraid that my tastebuds may have been a bit dulled.  I'm trying to take that into account in my review of my burger.  First of all, the toppings were piled high on the burger, so I opted to cut the burger in half before even attempting to pick it up.  I was afraid the pulled pork and apple slaw would slide right off the burger if I even so much as lifted the burger off the tray.  However, once I cut the burger it was a completely manageable size to both pick up and take a bite out of.  I had ordered my burger cooked medium and it was cooked perfectly, in my opinion.  Now here's the tough part: I could barely taste the chorizo seasoning.  Again, my tastebuds may have been dulled, but I had found myself able to distinguish other flavors quite easily, so I'm thinking that there was just not enough seasoning for my taste.  The pulled pork was really delicious and tender and the apple slaw was great, as usual (it was frequently a side on the Italian Pantry menu, so I was happy to see some things hadn't changed).  I ate the first half of the burger no problem, but I found myself dissecting the second half a bit with a knife and fork.  The bread was sturdy enough to hold the burger together, which a standard hamburger bun would not have been, but it also didn't add much to the burger.  I found myself eating just the pulled pork and burger by the end and I'm usually all about eating as much bread as possible.  The burger also came with a side of fries, which were actually some of the better fries I've had in awhile. 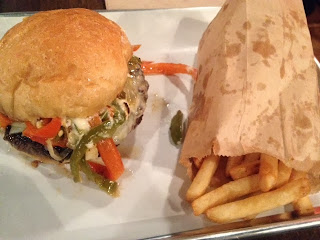 Onto my boyfriend's burger.  Usually I take a bite of his food so that I can accurately blog about it, but seeing as I was just getting over that cold, I decided not to contaminate his food on him. Instead, I asked his opinion on the burger.  He said that the burger was a bit undercooked, but that by no means ruined the flavor of the burger.  He thought that the flavors on the burger didn't quite mesh well together and he thinks it may have been because of the garlic mayo.  Disclaimer: he usually doesn't put mayo on anything.  He thought that the individual flavors were great, but that there was something a little off about all of the flavors mixing together. He also thought that the peppers and onions were cooked really nicely because they still had just a little bit of crunch left in them.

Finally, I thought the atmosphere of Urban Burger was a bit disappointing.  Italian Pantry had been a lovely, romantic sit-down dinner and I expected some element of that to stay in the new restaurant. Urban Burger had a bit too much of a fast-food sort of feel to it, which I wasn't quite expecting.  I knew that it had become a much more casual, family-friendly restaurant, but I still expected there to be wait staff or at least real utensils. The plastic knives, plastic forks, napkins, and ketchup were located near the front of the restaurant in a self-serve basket.  Tap water was located in a large self-serve container alongside plastic cups at the front counter.  Something was just missing for me, especially since this had been such a nice, fine-dining location previously.  I understand that this is probably a more successful business model, for the place was 3/4 full while we were there and we were in and out of there in less than 45 minutes.  Italian Pantry had a much pricier menu, but I never saw the place more than half full. Another thing I noticed was that a few couples had brought wine with them, but the only cups that were available to drink out of were the plastic water cups, which just feels a little tacky. The couple right next to us had brought beer, which was definitely the way to go.

My final recommendations?  I'm all about supporting local business, so definitely go give Urban Burger a chance.  However, if you're one of the Italian Pantry's former patrons, be prepared that even though it's the same owners, it's a completely different place.  The burgers were great, but it truly is a casual dining location and probably more well-suited for a quick lunch or dinner than a night out on the town.