How have I not blogged about Sun Tavern before? New York may be famous for its pizza, but I think that New Jersey is truly where the best pizza comes from. Northern and Central New Jersey, to be exact. Anyway, pizza is one of my favorite foods because who doesn't love a piece of bread slathered in cheese? I could go on about pizza for days, but I'll stop here. Sort of. I'll start talking about one specific pizza instead. It seems that everyone has their favorite pizzeria around town for one reason or another: place A has the biggest slices, place B has the best sicilian, place C has amazing seasonings and so on.  While I'm a big fan of traditional pizzeria pizza, there's something completely different about Sun Tavern's pizza.  It somehow manages to strike the perfect balance between being a traditional New Jersey pizza pie and being an artisan pizza. 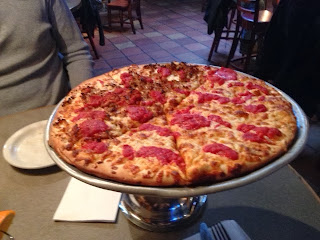 First of all, Sun Tavern doesn't just have pizza; it has a full menu of delicious foods that vary from traditional bar food to a nice Italian dinner. Additionally, the location itself has both a large bar area and a large dining room, so it has a place to sit whether you're there for football, beer, and pizza or for a nice dinner with your family or friends.  My absolute favorite pizza there is the Old World Pizza.  Ever
since I started ordering it about 6 years ago, I've been ordering my Old World Pizza the exact same way: double dough with sauce.  The Old World Pizza doesn't come with any sauce on it, instead using a layer of garlic as the buffer between the crust and the cheese.  I always used to order the pizza as-is, but after the first time I tried it with sauce, I never went back.  They don't coat it with sauce, but instead add sauce to a few spots throughout the slice. All of Sun Tavern's pizza is thin crust, but they offer the option of making it "double dough" which essentially makes the crust the same thickness as your average slice of pizza.  The Old World Pizza is deliciously cheesy and garlicky.  I've never had another slice of pizza quite like it.  My boyfriend is a big fan of toppings on his pizza, so we usually get half with sausage, which also tastes amazing.

I can't recommend Sun Tavern enough to those pizza-lovers out there.  It's great for takeout, bar food, family parties, or a casual dinner with friends.  It's got a friendly staff, great food, and a great atmosphere.  I've only ever tried the Roselle Park location, but I've heard their other locations are great as well!