A couple weekends ago my boyfriend and I decided we were in the mood to go out for a nicer dinner, but were stuck on where to go.  Luckily, I remembered that we had purchased a LivingSocial deal a few months earlier for Bice Ristorante that was about to expire.  The deal was for a bottle of wine, two appetizers, two pastas, and two entrees.  I had heard some good things about the restaurant while doing Restaurant Week research earlier in the summer, so we were really excited to go try it.  We made a reservation for 7pm, but got there closer to 6:45 and they were able to take us immediately.  The restaurant was pretty empty, especially for a Friday night, but had a really romantic ambiance.  The waitstaff was dressed all in white, and the table was set very simply with a white tablecloth and a candle.  Our waiter was extremely well-versed in the LivingSocial deal, which doesn't often happen at restaurants.  He explained exactly what was included in the deal and what wasn't.  We decided to start with the crispy calamari and the asparagus with parmesan cheese.  The asparagus was cooked perfectly so that it had just the right amount of crunch still left in it.  The calamari was also cooked well, but wasn't anything spectacular.

For the pasta course, I had the whole wheat spaghetti with tomato sauce, chicken, and julienne vegetables.  That's how the dish was described on the menu, anyway.  I was really not at all a fan of this dish.  It reminded me of the first time I attempted to make pasta primavera when I was a teenager.  The whole wheat spaghetti wasn't cooked properly and ended up being too tough and the dish was just overrun with peas and carrots.  The chicken was extremely tough and tasted like they had just microwaved a bunch of those Tyson grilled chicken strips.  I was actually grossed out by this dish and it nearly ruined the rest of the meal for me.  I actually can't even recall what my boyfriend ate because I was so distracted by the mushy peas all over my pasta.

For the main course, I had the risotto with shrimp, squid, and scallops in light tomato sauce.  After I recovered from how gross the pasta was, I truly got to enjoy this dish.  This dish was extremely delicious and I wish I had saved more room for it because risotto and seafood really doesn't make for good leftovers. The dish was really flavorful and had the perfect balance between seafood and risotto.  My boyfriend got the branzino, which was also really delicious.  I only had a small bite, but the sea bass was extremely rich and well-seasoned. 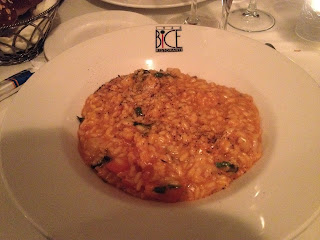 Overall,  Bice just gets a so-so rating in my book.  The waitstaff and ambiance were quite nice, but the food was more expensive than it's worth.  Even using the LivingSocial deal, I felt like we had overpaid for our meal.  There are so many amazing restaurants in New York City and Bice just falls short.  I wouldn't recommend Bice, but if you do end up going there then I'd definitely recommend trying the branzino!