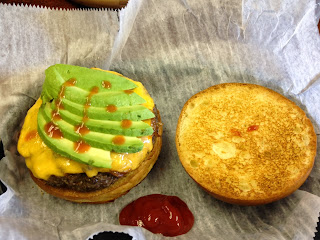 Last week my friend and I were out for a walk when we decided we should go walk to get lunch.  She'd heard a lot of great things about Loaded in Garwood, so we decided to go give it a try.  I'd just noticed it's storefront for the first time a week or two before because it's a bit off the beaten path in Garwood, but it had piqued my interest.   The restaurant was much smaller than I had anticipated because the food prep takes place right out in front, not in the back of the store.  It's bar-style seating for the most part, with just one or two tables in the corner.  The menu itself isn't too extensive, but it certainly all sounded delicious!  The menu options included a number of BBQ options that are served on a cornbread waffle bun, as well as burgers, fries, mac and cheese, beans and soup.  I opted for the Loaded burger, which comes with two toppings and cheese of your choice.  I topped mine with avocado, caramelized onions and cheddar cheese.  They make the burgers right in front of you, which is actually pretty cool and reassuring.  The meat looked nice and fresh and I watched as they mixed it with spices and formed it into a patty.  I'm a total germaphobe, so it was really awesome to watch my food being made and know that they were properly handling all of the food.  It was also awesome to know that they hand-make the patties and I'm not paying for just another frozen burger.  My burger was perfectly cooked, fresh, juicy and delicious.  I don't typically order burgers when I go out to eat, but I'll be having dreams about this burger for weeks to come.  I devoured the whole thing and I was actually sad when it was over.  I immediately started thinking about the next time I could come back.

We hadn't ordered any sides, but the guy working behind the counter, who I believe was the owner or manager, had made some extra for a takeout order and gave us the leftovers.  I saw on the menu that the fries can be coated in "Fry Dust" which ranged from a sweet mix to a spicy mixture along with a number of dipping sauces.  While our fries were dustless, we did get to try the dipping sauces and they were amazing.  He also gave us some mac and cheese to sample, which was also absolutely delicious.  We were told it wasn't his best batch because usually there's some smoked gouda in the cheese mixture and they had just run out, so I can't wait to go back and try it with the smoked gouda included.

Overall,  the service was amazing and the staff was so friendly.  The food was delicious and I can't wait to go back and sample more of the menu items.  It definitely attracts more of a casual lunch crowd and I got the feeling that a lot of local businesses order takeout for lunch.  I would suggest it for a rich, delicious lunch any day of the week with some friends or coworkers.  I'm definitely going to start spreading the word about Loaded!