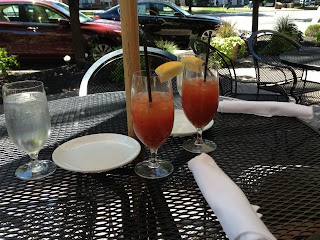 Last week my boyfriend and I went out for Sunday brunch. We were getting a little bored with our regular brunch locations, so we decided to try somewhere new. I had heard great things about Boulevard 572 in Kenilworth, so we decided to give it a try. It was a gorgeous day, so we opted to sit outside. Their brunch has two options: pre fixe or a la carte. The pre fixe option costs $25 for four "things to share" and one entree per person. We were a little skeptical about ordering the pre fixe option since there were only two of us and four things to share seemed to be a bit too much. The waiter assured us, however, that the sharable items are custom sized so there's an appropriate amount for each person at the table. We decided to go with the pre fixe option so that we could sample more of the food, plus this option came with bottomless mimosas, bellinis and bloody marys. We chose the beignets, crepes, fruit plate and french toast as our sharable dishes.


The sharable dishes came out all at once after just a short wait.  Despite what the waiter said, it did 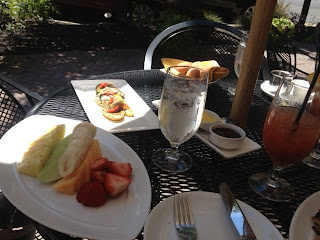 seem to be a bit too much food, but we were up for the challenge.  I started with the fruit plate, which had a nice assortment of melon, strawberries, pineapple and bananas.  There was also a side of chantilly cream, but I opted not to use it in favor of leaving room for other dishes.  Next I moved to the beignets, which were coated in cinnamon and sugar and came with three dipping sauces: chocolate, lemon curd and raspberry.  I sampled each of these sauces, but I mostly ate the chocolate.  Don't get me wrong, the other two sauces were great, but there's just something about dipping fried dough in chocolate that just seems so right. 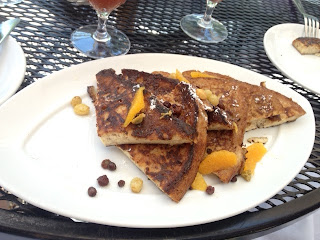 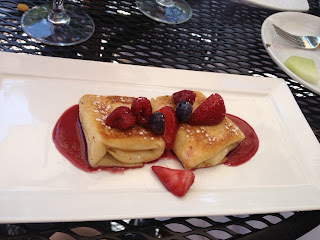 been a big fan.  That being said, it was probably the best french toast I've ever had.  The french toast was made from brioche and flavored with tahitian vanilla.  It came garnished with oranges, which I would have preferred weren't on there, but it was my boyfriend's favorite part of the meal.  I just couldn't handle the sweet and citrus combination on my breakfast foods.  Finally, we had the crepes.  Now, I had my first crepe last summer while traveling in France and hadn't had one since, so I was a bit afraid of what I'd encounter.  I ended up being pleasantly surprised because the crepes were so different than what I'd had in France that it was impossible to even compare the two.   The crepes were made with a fresh berry compote and were absolutely fresh and delightful.  The waiter had also accidentally selected that we wanted roasted vegetables when entering our order into the POS system, so they brought them out for us in case we decided we wanted them.  I sampled a piece and they were well-roasted and salty, but just didn't quite mesh with the sweet dishes we had ordered.  Overall, I think the sharable sides were a bit too heavy on the sweet side, so I got a little overwhelmed with all the sugar.  I think if there were more savory options on the sharable menu, then I would have been more satisfied.  Additionally, the pre fixe option is available
for two or more people, but I would definitely suggest trying it with around 4 people so that there's not SO much food. 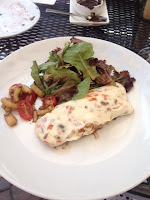 After all of this food, we still had our entrees to eat.  I ordered an egg-white omelet with peppers, onions, chorizo and cheddar cheese.  I had been trying so hard to only sample all of the sharable dishes, but when hunger strikes I can get a little bit carried away.  I ended up eating way more than I planned, but I still managed to save some room for the omelet.  Normally, I would have been disappointed with the small size of the omelet, but after all that food I just ate, I was thankful it was a reasonable size.  Overall, the omelet tasted great, but I can't say it was anything spectacular.  My boyfriend got the huevos rancheros, one of his favorites, and he said they were 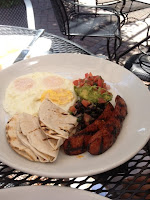 phenomenal.  It was sort of a deconstructed huevos rancheros compared with how I've normally seen the dish presented.  I think that's what really made the difference because you got to control how much of each ingredient goes into one bite.  Next time I go, I'm definitely opting for the huevos rancheros instead of the omelet!

All in all, I'd recommend this for a brunch for a special occasion.  You definitely need to be committed to eating quite a bit, but the atmosphere is welcoming and the food is great.  We spent about 2 hours there in total, which made for a nice relaxing afternoon.  There were several other bridal showers and other events going on throughout the restaurant so it's definitely well-suited to accommodate large crowds.  There are many other brunch places in the area that are better suited for a regular weekend brunch, but this is the best for a nicer event.  Additionally, the dinner menu seems to be a bit out of my price range, so it's nice to be able to dine here for brunch without breaking the bank (Side Note: The A La Carte brunch options averaged around $12 a dish--not a bad deal!) Next time I have a friend's birthday or special occasion coming up, I'll definitely recommend Boulevard 572!