Last weekend I visited one of my friends who lives in Washington, D.C.  My birthday was a month ago and we hadn't had a chance to celebrate, so she wanted to take me out to this new Mexican restaurant she had heard about.  We went to MXDC at around 8 on Saturday night and the restaurant was decently busy. We already had a reservation, but there didn't appear to be a wait for those just walking in.  To begin with, I really liked the ambiance.  Mexican restaurants tend to go with bright colors, Mexican decor and overall a very casual environment, however, MXDC had a very sophisticated, lounge-like feel.  I think this is because they also have an extremely extensive tequila menu and serve as a tequileria in addition to a restaurant. 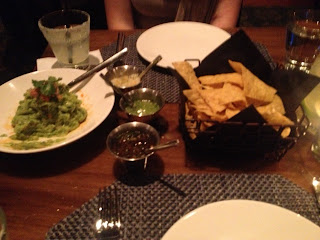 Our waiter was very informative right off the bat.  He asked us if we had ever dined there before and when we said we hadn't, he proceeded to explain the menu in terms of what amount of food is usually appropriate for two people to order.  It was really helpful that he explained that fact because majority of the menu was small plates, which wasn't very clearly marked in some cases.  We decided to start off with the guacamole and Romaine salad.  The romaine salad came with a "mexican crouton," which turned out to essentially be a slice of french bread turned into a crouton.  Overall, the Romaine salad was unimpressive and I could have done without it.  The guacamole, however, was absolutely delicious. There were several varieties of guacamole on the menu, including a crab guacamole, but we decided to just stick with the original.  I was a bit worried after making this choice that perhaps it wouldn't be as good as the other guacamoles since they had so many extravagant varieties, but it definitely was really fresh and well seasoned. 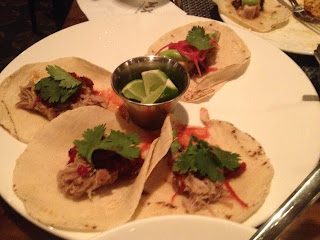 We then decided to split two orders of tacos, the Pork Belly and Duck Carnitas.  Each order comes with three tacos, so we were a little worried at first that both of us would fall in love with the same variety of taco and be left fighting for who gets the third one, but luckily we each picked a different
favorite.  I was slightly more partial to the pork belly, but both were so rich and flavorful.  The pork belly tacos really melted in your mouth.  They didn't over-garnish the tacos by including too many toppings.  Instead, it was simply garnished with pickled red onions and a bit of avocado, which was the perfect balance to the rich flavor of the taco.  The duck carnitas were also very rich, and came with a light cranberry jam on top. This was my first time trying duck and it definitely made me want to have it again. 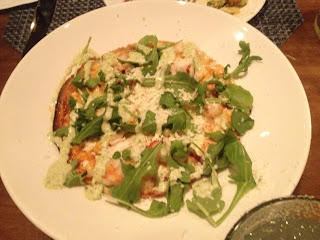 We finished our meal with a quesadilla with lobster and crab meat.  At this point I was so stuffed that I couldn't eat another bite.  Luckily, my friend was able to try a piece and said it was also delicious, but way too heavy and rich to eat anymore of it.  I think next time, I would skip the salad in favor of leaving room for a quesadilla or another small plate.  Though the quesadilla wasn't very big, it was apparently very filling.

Overall, I would definitely recommend this restaurant for a nice date night or a celebration with a few close friends.  It's not fit for a large, loud party, but it's perfect for a nice, quiet night out.  It was a little bit pricey, so I would recommend saving it for a special occasion.