A friend of mine is living out in Chicago, so a group of us took a trip out there to visit her.  I had never been before so I decided that in this post I'd include some of the fun sites we visited along with 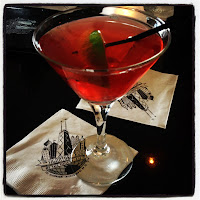 the reviews of the restaurants we dined at.  One of the best sites we visited was the Signature Room at the John Hancock Center.  The Signature Room is a cocktail lounge located on the 95th floor of the Hancock Center and it has amazing views of Chicago.  The cocktails are a bit pricey, but they are definitely worth it for the views!  It was surprisingly not very crowded up there and we were able to get a seat right away, however, the window seats were already taken.  We were able to get a pretty big booth facing the windows, so even though we were sitting a bit farther back we still were able to see the views from our table.  We stayed up there for an hour or so and it was a really relaxing, nice time.  They also offered food in the lounge, but it was a bit to expensive for our budgets.  We decided to go somewhere a little more casual for dinner afterward. 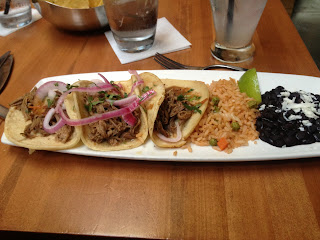 That evening we dined at Cantina Laredo.  It's a small chain offering a wide variety of Mexican cuisine for an affordable price.  To start, we got the guacamole, which is made right at the table.  It was a pretty generous serving of guacamole for a group of six of us.  Additionally, they allow you to customize how spicy you'd like the guacamole to be, which worked out well since we had a few people in our group who aren't the biggest fans of spicy food.  The guacamole was really fresh and delicious.  For an entree I ordered the Tacos de Carnitas, which was three tacos with slow-roasted pork in a chipotle wine sauce.  The meat was really tender and delicious and for once I wasn't disappointed with the tortilla!  Instead of a flour tortilla, the tacos were wrapped in a soft corn tortilla which made all the difference.  The tortilla was also a little bit crispy so it really added to the flavor of the taco instead of detracting from it.  Everyone at the table was satisfied with their meal.   I'd definitely recommend this place for a casual dining experience in Chicago or anywhere else!

After we finished our meals we were looking for a casual place to hang out and grab a few drinks before going out for the night.  My friend quickly searched for some places on her phone and came across a place called the WaterShed which was located in the basement of Pops for Champage, a champagne bar.  The WaterShed was easily one of my favorite bars that I've ever been to.  They offered a wide variety of craft beers in a fun atmosphere. I definitely recommend visiting the WaterShed if you're in the area! 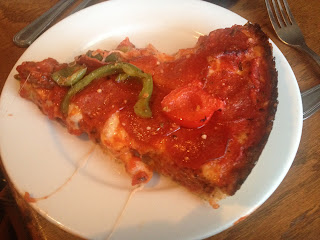 One of the other fun things we did while in Chicago was played a game called Whirlyball.  None of us had every heard of, or played, Whirlyball before, but we decided to go for it.  Whirlyball is essentially a combination of lacrosse and bumper cars.  We were not the best at Whirlyball, but it was definitely a lot of fun and is perfect for a rainy afternoon activity with family or friends.  After Whirlyball we decided to go get some Deep Dish Pizza!  We decided to go to Pequod's Pizza which is a small chain in the area and had really great ratings online.  We split a large deep dish pizza with peppers and half pepperoni, half sausage.  One slice was definitely enough for each of us.  I had never had deep dish pizza before and I'm glad I got to try a real Chicago-style deep dish pizza.  Pequod's had a really casual, family-friendly atmosphere and specializes in caramelized crust on their pizzas.  The pizza itself was extremely doughy and required a fork and knife to eat in any sort of civilized manner, but it was 100% worth it.  I would recommend Pequod's to anyone looking to try authentic deep dish pizza.

Overall, we had an amazing trip.  This entry is only the highlights of my trip and I wish I had the time to write about more of it because it really was an awesome city. 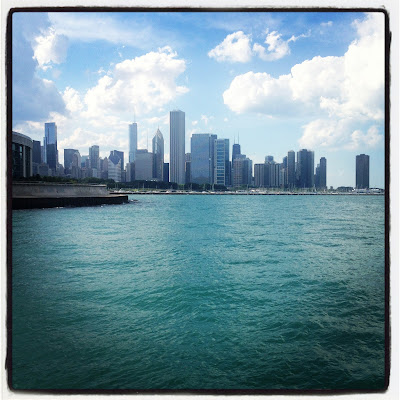