To celebrate the end of my second semester in Grad School, my boyfriend and I went out to Trap Rock Restaurant & Brewery for dinner.  I'd been there once before for a friend's birthday and couldn't wait to go back.  It's a bit pricier than our usual dinner out, but we decided to splurge since we were celebrating!  First of all, this place is a microbrewery, so all of their beers are made in house, which makes it a really fun location when you're in the mood to try something new.  They have a beer to match every palate, but they also have a full bar for those who aren't beer fans.  Additionally, they have the most delicious bread basket.  Instead of regular bread, they serve cheesy biscuits and homemade pretzels. 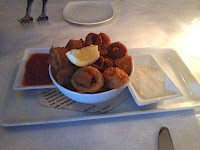 For an appetizer we started with the Pretzel Crusted Crispy Fresh RI Calamari.  The calamari came with two dipping sauces: marinara and a lemon dijon aioli.  I thought that since the calamari was "pretzel crusted" it would have a slightly different flavor, but in the end it really just tasted like regular fried calamari.   It was really good fried calamari, but still not much different from any other variety. 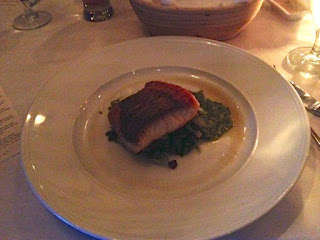 For the entree, I really wanted the salmon, but because I always order salmon I decided to try something new.  Instead, I ordered the Red Snapper.  I'd never tried Snapper before, but I'd heard it's not too "fishy" tasting, which is important to me.  I made the mistake of ordering Sole once and it was way too fishy tasting, in my opinion.  Our appetizer came out fairly quickly, so I was worried our entrees would too and we'd be rushed in and out of the restaurant before we enjoyed our dining experience.  However, the entree came out quite a bit later so that we had plenty of time to enjoy our drinks before our entrees. The snapper was served on a bed of spinach, which was sauteed with garlic and ham.  Honestly, I may have enjoyed the spinach a bit more than the snapper.  While the snapper was delicious, it was somehow lacking.  I'm glad I tried something new and know now that I like snapper, but I think it was lacking in flavor in comparison to the rich, salty spinach.

My boyfriend got a NY Strip Steak and let me try it.  I'm not a huge fan of steak, but I really enjoyed 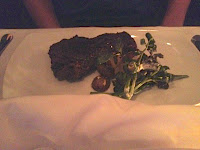 the few bites I had.  My biggest issue with steak is that it can be too chewy, but this was cooked perfectly so that it almost melted in your mouth.

Overall, I'd highly recommend this restaurant for a celebratory dinner.  I saw several other tables that appeared to be business dinners, so I suppose it's a popular location for that as well.  The dress seems to be sort of "business casual," but there were definitely a few tables wearing t-shirts and jeans, so it doesn't have a strict dress code or anything like that.  The one thing that I am sort of on the fence about with this restaurant is that the menu constantly changes.  There were a few menu items that I had loved last time around that weren't on the menu anymore.  For example, there was a sea salt caramel dessert that I had fallen in love with and it was replaced on the menu.  It seems they print out new menus daily, swapping out a few of the "specials," but it would also appear that they change their menu standards pretty frequently as well.  This is great because you'll never get bored of the menu, but it also means you can't have a standard go-to item and there's no guarantee your favorite meal will be there next time you go.