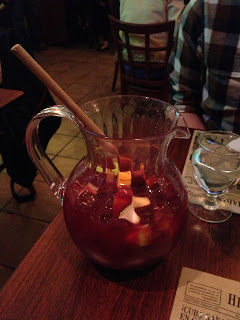 Last week we visited the newly opened Lidia's Cuban Kitchen in Cranford, NJ. We went on a Saturday night around 6:30 and had about a half hour wait for our table. The hostess and owner were both very welcoming and offered us water and offered to open our bottle of wine while we waited to be seated. They even kept us posted about how much longer our wait would be. Once we were finally seated, we did have to wait awhile for our waitress to come by with water and a bread basket, but the restaurant was extremely busy so perhaps they were a bit short-staffed. We started by having our bottle of wine turned into Sangria for a fee of $12. I have to say, I was not a fan of the way the Sangria was made. I've seen this feature offered at other restaurants and I'm usually a big fan of this extra at BYOB restaurants, but this sangria was really citrus-y and difficult to drink.  Additionally, we had to pour our own wine into the mixture they brought us and I'm not exactly an expert on how much wine to use, so I had a hard time making the mixture the right balance between wine and the mixture.  I would have preferred that they had simply made the entire sangria mixture for us, including the wine. 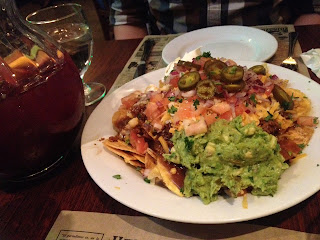 For an appetizer we ordered the cuban nachos, which were simply fried plantain chips covered in the usual nacho toppings.  I had seen on Yelp that these were a specialty, but I was a little bit disappointed. The cheese wasn't melted and it seemed as if the toppings were just thrown on top of a pile of plantain chips.  There was very little artistry to how they were done and I didn't think they were anything special.  I wish I had tried a different appetizer instead because looking around it seemed like everyone else had interesting, delicious appetizers. 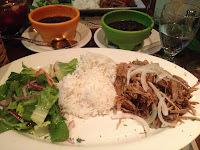 For an entree, I got the Lechon Asado or the Roasted Pulled Pork.  Our entrees came out pretty quickly after our appetizer so we didn't have much time to digest the large portion of nachos we were given.  The entree was the best part of our experience, by far.  The pulled pork was perfectly cooked so that it didn't get too dried out.  It was also served with rice and beans.  The rice was white rice, which surprised me because I thought that maybe they would have dressed it up a bit more.  I'm not complaining though, I do love white rice. 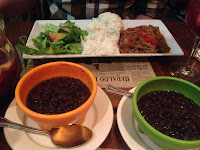 My boyfriend got the Pollo a la Plancha, which was grilled chicken breast smothered in onions.  Our meals looked very similar, as we both chose a pulled meat.  I sampled a bit of his and found it to be equally well cooked.  Both of our meals looked a bit bland on the plate, which is a shame.  I think that had the dishes been garnished a bit more nicely, it really would have enhanced the meal. 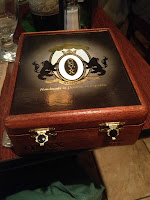 Overall, I think this restaurant gets an average rating from me.  Perhaps because it's only a few weeks old, they really haven't had the chance to get things running quite as smoothly as they'd hoped.  The wait service was a bit slow and confusing, but the staff was definitely friendly.  Additionally, the little things, such as the sangria or the bread could use some improvement.  The bread that we were given at the beginning of our meal was very bland and after waiting for our table for awhile, it would have been nice to sit down to a nicer piece of bread while waiting for our appetizer to come out.  I did think that the newspaper placemats and the cigar box that the bill comes in were a nice touch and I'd like to see that sort of thoughtfulness and attention to detail come through in the presentation of the meals as well.  I think I'll give Lidia's some more time to settle in and give it a second try.