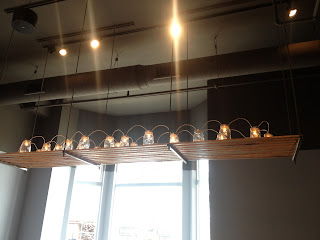 I've decided that I don't review enough casual dining locations, which is what I frequent most often. Today, I visited &grain in Garwood, NJ for the first time and it was amazing! I pass it while driving pretty often and I always thought it was just another specialty bread shop, but a couple of weeks ago we spotted some people sitting outside eating and realized that they must have more than that. We looked it up and discovered they have sandwiches and salads and they specialize in bread. First of all, I really enjoyed the decor and atmosphere. It had a very modern, urban sort of vibe with lots of creative fixtures, like using mason jars for lights. The staff was also really friendly. They apparently had an unexpected lunch rush just before we got there, so the kitchen was backed up for 15 minutes and they were extremely apologetic about the wait. It honestly didn't seem like too much of a wait to me seeing as I usually wait that long at somewhere like Panera.

I ordered the Chipotle Chicken sandwich, which was amazing. It was grilled chicken in a chipotle sauce with smoked gouda on ciabatta bread. It wasn't a panini, but the entire thing was warm, from the chicken to the bread. You could really taste how fresh all of the ingredients were.  The bread was really soft and
doughy and made a huge difference in how the sandwich tasted.  My boyfriend got the ABLT(Avocado, bacon lettuce and tomato), which is a go-to of his and he said it's the best ABLT he's ever had.  I had a quick bite of his and it was equally as fresh and the bread was really buttery and delicious, the way a good BLT should be.  Both of our sandwiches came with a small side salad of mixed greens in a light dressing.  It wasn't much, but it fulfilled that need that I know many people have of needing a side with their meal.  I really wanted to try this sharable option they had on the menu which was a basket of bread and your choice of 3 spreads.  The spreads on the menu today included a garlic aioli, an herb aioli, cinnamon butter and many more
options.  I wanted to try it so badly, but we really had our hearts set on trying the sandwiches.  I'm definitely coming back to give those spreads a try!

Overall, I'd definitely recommend this place for a casual lunch.  It's definitely family-friendly, as there were tons of kids around while we were there.  It has a really cool atmosphere and a unique food and drink selection.  Though I didn't end up trying one, they had these fun looking bottled sodas there that I think I want to have next time!  My only word of advice to the owner would be to put a little more advertising out front that they serve breakfast and lunch because otherwise it can be easily overlooked!