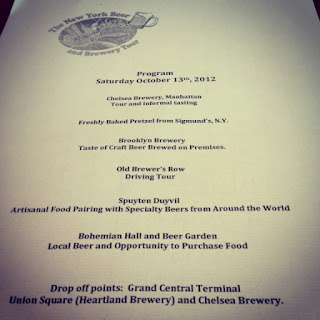 This entry is a little bit different than my regular food blog, but I decided to step outside the box.  Two weeks ago my boyfriend and I went on the New York Beer and Brewery Tour for my boyfriend's birthday.  It was a bus tour of New York City with stops at some famous breweries, bars, and historic brewing sites.  The tour began at the Chelsea Brewing Company at Chelsea Piers.  There we met up with our tour guide, Marshall and the rest of the people on the tour (I'd say about 20 in total).  First of all, I thought the day got off to a great start because even though some people were running late for the tour, Marshall made sure to accommodate them without inconveniencing those who were already on time for the tour.

We started off with a sample of Chelsea Brewing Company's Checker Cab Blonde Ale, which I've had a few times before at a local bar.  I thought it tasted a little different when I first tried it, but I decided it was probably because it was only noon, so perhaps my taste buds weren't up for the task of tasting beer quite yet.  However, as we got a tour of the brewery, the brewer mentioned that each batch tastes a little different since everything there is done by hand, not by machines.  Therefore, the beer I sampled did have a slightly lemon-y flavor to it and they really weren't sure why.  We also got to sample their Pumpkin beer, which I thought was delicious.

After we were done with our tour of Chelsea, we got onto the tour bus and were immediately served nice, warm pretzels from Sigmund's.  It was one of the most delicious pretzels I've ever had.  At this point, our tour guide Marshall began telling us about the history of beer and brewing in New York City as we traveled into Brooklyn to go to Brooklyn Brewery.  I'd been to Brooklyn Brewery before and it's always a lot of fun.  We were given a token for one free beer and given about a half hour to get our beer and hang out.  I had the Fiat Lux beer, which I'd tried the last time I was there and absolutely loved. 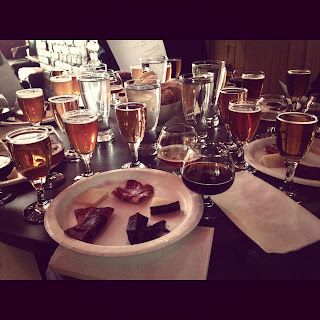 At this point we once again got on the tour bus and drove around Brooklyn a bit to learn more about the history of brewing in Brooklyn.  Our next stop was Spuyten Duyvil, which is also in Brooklyn.  Here we had an artisanal food pairing with specialty beers.  We were seated at tables of about 6 people each with 5 small beer samples and a meat, cheese or chocolate to go with each beer.  The bartender who had put it together explained each pairing to us and then we were given about a half hour to eat, drink and chat with one another.  I thought that the entire thing was put together really nicely and it was the perfect snack for the middle of the afternoon along with some beers that I never would have tried before.

Once again, we hopped back on the bus and drove over to Astoria, Queens for our final stop: The Bohemian Hall and Beer Garden.  This place was a lot of fun.  There was a huge beer garden with a live band, long tables and some great food.  We were given a few more specialty beer samples and told to just hang out and enjoy the band.  At this point we were given the option of either staying at the beer garden or getting back on the bus to Manhattan.  We chose to get on the bus so that we had easy transportation back to the train station, but many people on the tour chose to stay.  The bus then dropped people off at whatever points along the bus route that they wished.  The bus driver even went out of his way to drop us off at Penn Station since there were very few other stop requests.

Overall, it was a great day for my boyfriend and I, as well as everyone on the tour.  Marshall made the driving portions of the tour very informative and entertaining, throwing in some trivia questions with prizes, as well as some souvenirs along the way. Marshall clearly knew his stuff and made a point to talk to each and every person on the tour on an individual basis for at least a few minutes.  I would definitely recommend this to history lovers, beer lovers or anyone who enjoys a fun, relaxing day!