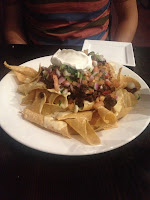 The other night I visited George Street Ale House in New Brunswick, NJ.  I'd been here a few times before, but not in quite sometime.  The place was pretty busy, but not packed for a Saturday night.  There had been a Rutgers football game earlier in the day, so there were still some stragglers left over from that.  My boyfriend and I made a reservation and were seated right away.  Our service was a little slow to begin with, but after we placed our orders for food, it definitely picked up a little bit.  We were seated in the bar area and not the downstairs seating area so the wait service was a little different than a traditional restaurant, as we had many different waiters and waitresses coming to check up on us.

For an appetizer we ordered the Nachos Grande.  My boyfriend and I absolutely love nachos, so we were really excited for this appetizer.  The nachos were covered in a cheese sauce, onions, pico de gallo, steak chili, jalapenos and sour cream.  Only negative of the nachos is that I wish they were covered in real cheese rather than a cheese sauce.  The steak chili, however, is phenomenal.  You can definitely tell the difference from a standard beef chili and it really makes the nachos so much better. 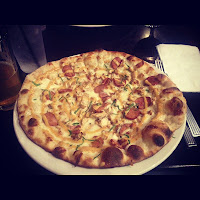 For my entree, I got the pizza special of the night which was a pizza with andouille sausage, chicken, mozzarella, and a honey mustard chipotle sauce drizzled on top.  The pizza was amazing.  Unfortunately, I was pretty full from the nachos at this point so I could only eat a couple of the slices, but I took the rest home and enjoyed the leftovers for days.  The dough was cooked perfectly and the flavor of the sausage, chicken and sauce combined were fantastic together.  I wish this was a regular menu item because I'd get it every single time.  My boyfriend got the Alehouse burger, which is one of their specialties.  It comes with gouda, applewood smoked bacon and chipotle mayonnaise.  I had a couple bites of it and it was delicious.  The burger itself was really juicy and I liked the gouda as it's not traditionally found on a burger. 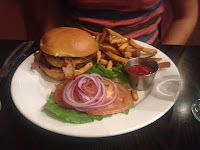 Overall, the George Street Ale House is you're typical Gastropub with some interesting twists on the menu items.  The bar, in my opinion, doesn't look too enticing from the outside, but the inside is nicely furnished and has a great atmosphere.  Additionally, it has a great beer selection with some of the more unusual beers on tap.  I'd say it's a great place for a casual dinner or a night out for drinks.  I'll definitely be back!