Last night my boyfriend and I went to Winberie's in Summit, NJ.  I had heard a lot about this restaurant, but had never tried it myself.  I was pleasantly surprised by the food, prices and atmosphere.  The restaurant is located in the heart of downtown Summit, on the corner of Springfield Ave and Kent Place Boulevard.  There was a nice outdoor seating area with strings of lights overhead, which I was a big fan of.  I had forgotten to bring a sweater and it was a little bit chilly out, otherwise we would have definitely chosen to eat outside.  Inside the restaurant had very low lighting and a nice mix of booths and tables.  There were very few diners inside the restaurant, but the outside area was nearly full.  We were seated at a nice booth with a little lamp on the table.  They had some really great beers on tap, which is always a plus at a restaurant. 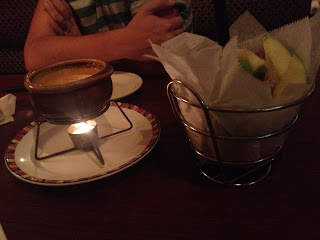 As an appetizer, my boyfriend and I split the Sam Adams Cheddar and Beer Fondue.  The dish came with a basket of apples and bread to dip into the cheddar cheese.  I visited France earlier this summer and had fondue on multiple occasions there, and I have to say that this fondue could certainly compete with what I had in France.  My boyfriend was pleasantly surprised by how much he liked the apples dipped in cheddar, he was expecting it to be an odd combination, but ended up really enjoying it.  I was a bigger fan of dipping the bread, but I also could eat a loaf of bread for breakfast, lunch and dinner.  We ended up eating all of the cheese and scraping the inside of the dish to get every last bit of it.  It was definitely one of the best appetizers I've had in a long time. 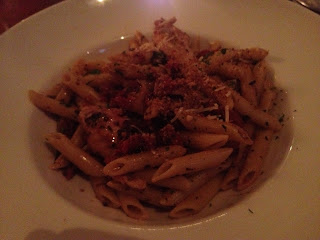 For an entree I ordered the Mediterranean Pasta with Chicken.  The dish consisted of penne with sundried tomatoes, roasted garlic, kalamata olives, capers, and chicken.  The pasta was so flavorful, and a little bit spicy at times, but it was really well made.  I think the combination of the sundried tomatoes and kalamata olives could have really overpowered the dish, but they ended up being really  nice complements to the chicken and pasta.  I opted for the regular portion instead of the small portion so that I could have the leftovers for lunch the next day, but I almost ate the whole regular portion anyway.  I had to stop myself from cleaning the plate for fear of how full I would be later.  It was just so delicious that I couldn't stop. 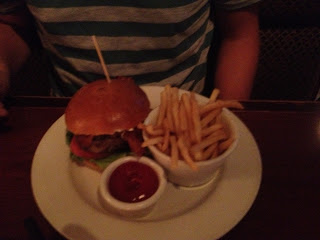 My boyfriend ordered the Bistro Burger, which was topped with brie and applewood smoked bacon.  He allowed me to have a couple bites of his burger and it was so juicy and delicious.  He finished the whole burger, which I know I never would have been able to.  It was delicious to have a few bites of, but I don't think I could have eaten it for a meal.  He opted for a side of fries, which I, of course, snagged a few of and thought they were crispy and not too greasy.

I thought the restaurant was going to have a far less welcoming atmosphere considering its location in Summit, which is a more wealthy neighborhood with some really fancy restaurants.  Our food was really affordable, and there were some higher priced entrees on the menu, but overall, the food was well-priced.  Winberie's has more than one location, so I would definitely suggest seeing if there's one in your area!

(I apologize for the dark/blurry pictures.  As I said, there was low-lighting and I'm definitely not one to use the flash in a restaurant.)