Last weekend I visited one of my friends who had recently relocated to Arlington, VA for work.  She's only been living there for about a month, so we were heavily relying on Internet reviews to pick out a restaurant for dinner.  We ended up staying at her work event a little later than we planned, and wanted to stay local to get dinner.  We decided to go to Rustico Restaurant because it was near where we were headed for the night.  The place was packed, but I guess that should be expected for 7:30 on a Friday night.  We were told it would be an hour wait to be seated, but that any seats in the bar area or on the patio were open seating.  Luckily, we came across a table in the bar area within a few minutes. 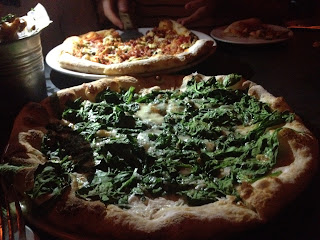 My friend and I decided to split a pizza and a salad and our guy friends decided to split a pizza and some french fries.  We got the Spinach Pizza and a Caeser Salad and the guys got the Naked Pizza and added chicken to it, as well as french fries with ranch.  I have to say that for a busy Friday night, the wait service was pretty efficient and our waiter was always nearby.  Our salads and french fries were out within a few minutes, which was perfect because we were all extremely hungry.  Our caeser salad was pretty standard fare, but their ranch fries were great.  When they originally ordered them they thought they would come with ranch dressing either on the side or on the fries, but it turned out to be ranch seasoning.  Despite the surprise, the fries were delicious and I wish I had ordered them myself.

Having been born in New York and raised in New Jersey, I can be a bit of a pizza snob so I was nervous about getting pizza so far from home.  It was by no means New York or New Jersey style pizzeria pizza, but instead was of the gourmet, brick oven sort.  The pizza was fantastic and had a ton of spinach on it and not too much cheese, but I, personally, was a fan of this.  The whole thing could have used a little more seasoning, but the cheese, spinach and crust were all delicious.  I didn't get a chance to try my friends' pizza, but they seemed to enjoy it as well.

I was also a big fan of the atmosphere at Rustico.  It was a bar/restaurant sort of environment and they had TONS of beers on tap.  There was very low-lighting (hence the weirdly lit photo above) and rustic decor, which obviously matched the name.  I'm sure I'll be back to Arlington sometime soon and I'd love to go back to Rustico, though I'm dying to try out some of the other great places I've heard about!