Last Tuesday my boyfriend and I went to Old Man Rafferty's in New Brunswick, NJ.  It's located just off the Rutgers campus and has been a longtime favorite of ours as we are both Rutgers alums.  Old Man Rafferty's is a pretty big restaurant, but I'd say only about 10-15 tables were seated while we were there so it was a really quiet dining experience. 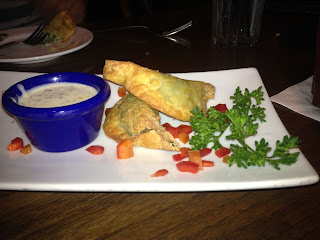 Even though we both have our favorite dishes there, we decided to be adventurous and try something new.  For an appetizer we tried one of the night's specials: Spinach and Artichoke Rangoons.  We were pretty disappointed that only 4 came with the appetizer because Old Man Rafferty's usually has HUGE portions.  We both really enjoyed the Rangoons, however, and thought the dipping sauce that came with them was the best part.  We both had picked up a rangoon and placed them on our plates when the waiter ran by and took away the appetizer plate containing the dipping sauce.  He came by so fast that we didn't have enough time to stop him and were forced to eat them without our beloved sauce :(  That was a big disappointment because as I said, there were only 4 rangoons to begin with and we had to eat 2 of them without any sauce. 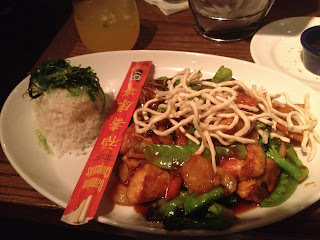 As an entree I got the Oriental Stir Fry with chicken.  The waiter asked me if I wanted the small portion or the dinner portion and I opted for the dinner portion.  Poor choice on my part.  The dinner portion was gigantic and we had plans for after dinner and I had nowhere to keep any leftovers.  The stir fry was fantastic though.  It was a delicious mix of chicken, vegetables and crispy noodles all covered in a sweet sauce with a side of rice.  I was barely able to eat even half of the entree, but it was so good that I wish I could have kept some for leftovers.  I would advise that if you want two meals worth of food, opt for the dinner portion and save the rest.  If you just want a meal for the evening, get the small portion because even I couldn't make a dent in the regular portion and I have quite the appetite.

My boyfriend got another one of the specials for his entree which was a smoked chicken and mushroom ravioli.  He enjoyed it so much that he was only willing to give me the tiniest bite of his ravioli, but it was delicious and really savory.  There were about 5 or 6 big raviolis covered in a cheesy, creamy sauce and stuffed with smoked chicken and portobello mushrooms.  My boyfriend usually hates mushrooms, but said that the way that they were prepared in the ravioli he thought that they were great. 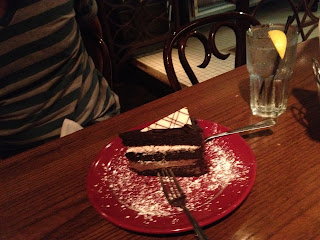 For anyone who has ever been to Old Man Rafferty's, you know that their dessert is one of the best parts of the entire meal.  As you can tell from my blog so far, I rarely order dessert at a restaurant,  however, you always have to make an exception at Old Man Rafferty's.  Seeing as I had already stuffed my face full of Oriental Stir Fry, my boyfriend and I opted to split a piece and since he is the one that really loves dessert, I let him choose the cake.  Now, the way it works at Old Man Rafferty's is that there is a listing on the menu of all the cakes they make, but you have to walk up to the dessert case to look and see what selection they have available that day.  My boyfriend picked out the Chocolate Zanzibar Torte cake, which has three layers of chocolate cake with layers of white chocolate mousse, chocolate mousse and ganache icing.  I believe our waiter also told us that the cake is soaked in coffee.  The cake was amazing.  It was delciously chocolatey, but wasn't overwhelmingly sweet.  It was the perfect end to a great meal.

Old Man Rafferty's is a great restaurant for any occasion, it's a casual atmosphere with a wide variety of menu items and prices.  I've been there many times before on date with my boyfriend, casual dinner with friends and with my parents to celebrate special events.  I would recommend Old Man Rafferty's to anyone looking for a nice place to enjoy a meal any night of the week.