Sorry for the recent lag in entries, it's been a busy couple of weeks!  Not to worry though, there will be some new reviews coming this week.  Last week I visited Avenue East, an Asian Fusion restaurant in Cranford, NJ.  Avenue East has been around for almost ten years now and still draws a steady crowd.  We visited on a Monday night and the restaurant was packed. We had no wait time to sit down as there were only two of us, but saw several larger parties waiting to be seated.  My boyfriend had a long day at work, so by the time we were able to get to dinner we were both ravenous.  We decided to order two appetizers right away to avoid shoveling down our entrees without even enjoying them.  We ordered the Spicy Salmon Skin Salad and a Volcano Roll to start.  The appetizers came out not a moment too soon and my boyfriend and I devoured them. 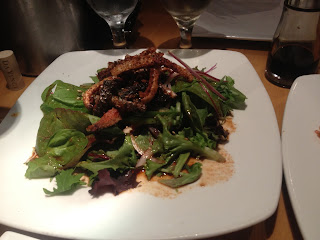 The Spicy Salmon Skin Salad was absolutely delicious and perfectly spicy.  Though, it should be noted, both my boyfriend and myself have an unbelievable tolerance for spicy foods, so what is delicious to us may be intolerable to others.  The salad was made of spring mix lettuce, beets, radish, carrots, onion, jalapeno and topped with crispy salmon skin.  Every element of the salad was a little bit spicy, but the salmon skin was salty, spicy, crunchy and delectable.  Definitely a favorite dish of mine. 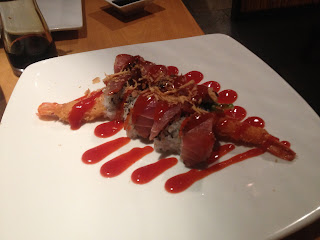 The Volcano Roll was also very good.  Sushi is one of those foods that can be very hard to judge, because the same roll can be vastly different from restaurant to restaurant.  The Volcano Roll, which is a specialty roll, is made up of shrimp tempura, onion, sereno pepper, spiced tuna, and shallot crunch.  The roll was topped with a red specialty sauce, which I love to see on sushi.  I feel that the right sauce can really make or break a roll.  I thoroughly enjoyed the Volcano Roll, but I do hate when the shrimp tails are still attached as it makes it very difficult for me to easily eat those pieces.  It's nearly impossible to avoid though; I'm not sure I've ever been to a restaurant that doesn't include the tails on a tempura roll.

For an entree I got the Spicy Basil Beef.  The dish included beef, onions, peppers, green beans all covered in a basil/chili paste sauce.  I'd had this dish before with the chicken, and I have to say the chicken version was much better.  The beef was a little too chewy for my liking and made some of the dish very difficult to eat.  The vegetables were really crunchy and well-cooked.  The dish was also quite spicy, but at a far more tolerable level.  My boyfriend ordered the Orange Chicken, which was also a great dish.  My only complaint is that his dish doesn't come with any form of vegetable, it's a dish comprised of only chicken.  It does come with a side of rice(white or brown), but so do majority of the entrees.

Avenue East is a great place to eat for all occasions.  The restaurant is filled with families, couples, friends etc.  Additionally, the food has a calorie listing for almost all the dishes, and the food is low fat, low calorie and low carb for the most part.  It definitely has options for almost every dietary need, though I'm not sure if they have a gluten-free menu. It's not obviously advertised, but many restaurants do have gluten-free options if asked.  Other notable things about Avenue East: the restaurant is BYOB, does take-out and has an EXCELLENT daily lunch special.  Their lunch special gives you tons of food for around $5.  I'd absolutely recommend Avenue East to anyone in the area. It's got a great atmosphere, fast service (but not so fast that you feel rushed), affordable prices and delicious food.