Last night my boyfriend and I attended Global Citizen's Festival in Central Park.  We were having a great time at the concert, but we were suddenly extremely hungry and noticed the food line was about 200 people long.  We opted to leave the concert a few minutes early and beat the rush and just sort of wandered until we found somewhere to eat.  We ended up stopping at AG Kitchen on 72nd and Columbus because the menu looked delicious, affordable and the restaurant looked busy, but not too busy to seat us.  We were told it would be a fifteen minute wait before we could be seated, which was fine, so we grabbed some drinks at the bar.  The bar was also extremely crowded so we took our drinks back towards where the host stand was so that we'd be able to hear our names when we were called.  During that time we witnessed several arguments between the host and the apparent manager, which was a little uncomfortable and unprofessional since they were surrounded by customers.  We were finally seated about 15-20 minutes later and didn't see our waitress for about 10 minutes or so after we sat down.  We had both already picked out our appetizer and entree because we were so hungry so we were prepared to order when she came by.  We got guacamole to start and my boyfriend ordered the Manhattan Latin burger and I ordered the pork mini tacos.  The waitress then informed me that they were out of the pork tacos and stood over my shoulder and waited for me to make a new meal selection.  I felt flustered and rushed, so I picked the Peruvian Salmon which was right above the mini tacos I had originally ordered.  The waitress offered no suggestion of a replacement meal and was of no help in my quick reselection of a meal. 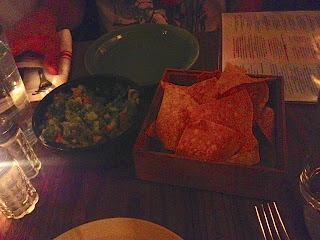 Our guacamole took 25 minutes to come out, which I thought was a little ridiculous even at a busy restaurant on a Saturday night.  The table next to us ordered right after us and got their entrees before we even got our guacamole.  Despite this, the guacamole was delicious and we devoured it because of how hungry we were.  When our entrees arrived, my dish turned out to be ceviche, which I was not at all expecting.  I later realized that the name of the section on the menu was Mini Tacos/Ceviches but in my rush to select a new entree with the waitress over my shoulder, I failed to notice this and had thought I ordered another kind of mini taco.  I think the waitress should have warned me what I had ordered as nowhere in the name of the dish did it mention that it was ceviche.  Luckily, I like ceviche, it was just unexpected and not as substantial of a meal as I had hoped.  My boyfriend gave me half of his burger, which was really good, but was tarnished by my anger over the poor wait service and accidental order.  The table next to us also had their share of trouble with the waitress.  The woman ended up sending her whole meal back because her french fries were cold and her burger was extremely rare when she had ordered it medium.  The table next to us also had a billing issue, as the woman's meal was replaced and not only was she charged for the first meal, but also for the second replacement meal.  Additionally, no one came around to refill our water glasses, and the one glass I had was lukewarm.

Overall, I think the food at this restaurant had a lot of potential, but the poor service completely ruined the experience. I will absolutely NOT be back to this restaurant and would not recommend it to anyone.  It was a waste of our time and money, and we both left in terrible moods after having eaten there.