I went to the Hamptons this weekend for a small getaway.  My grandparents have had a house out there since the 1960s and the area is full of memories for myself and my family.  Now that I'm old enough to venture out there on my own, my experience in the Hamptons has greatly changed from one of long beach days to one of trying out exclusive shops and restaurants.  This weekend a friend of mine and I went to Bridgehampton for a day of shopping and relaxing.  However, Saturday turned out to be an extremely rainy day and shopping was a little bit difficult in the pouring rain.  We decided to stop at World Pie, a high-end pizzeria famed for their great variety of toppings.  I'd been there a couple of times before and always had a great experience.  This time was not quite as good of an experience.  Though we were expecting a long wait for lunch because their outdoor patio was closed due to the rain, we were given a wait time of only ten minutes when we arrived.  We waited for more than half an hour to be seated, despite the hostess' constant reassurance that we would be seated within moments.  The hostess was also responsible for resetting the tables, and was frequently not available to customers walking in who were looking to put their names down. 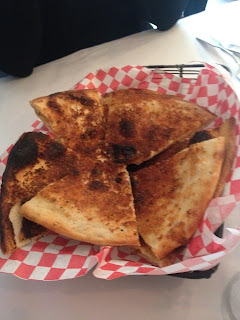 Once we were seated, we did not see our waiter for more than 10 minutes after we sat down.  He would only take our drink orders when he first greeted us, even though we were both ready with our food order.  The restaurant seemed to be extremely understaffed, as the waiter seemed to be taking care of 7 tables in our room of the restaurant and perhaps other tables in the other room.  We eventually ordered the sal "pane" appetizer, which was a rosemary focaccia bread.  The bread seemed to be slightly overcooked and under flavored; probably the result of an understaffed kitchen.  Our pizza came out very soon after our appetizer, which we had mixed feelings about.  Though we were extremely hungry and trying to eat as soon as possible, we also wanted to enjoy our restaurant experience and not get rushed out after waiting nearly 40 minutes to be seated. 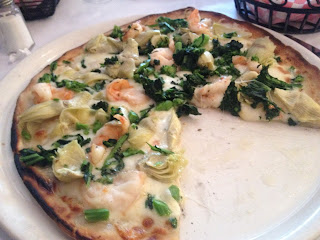 I ordered one of the specials of the day, the pizza bianco.  The pizza bianco was a white pizza with garlic, artichoke hearts, shrimp and spinach.  The pizza was absolutely delicious, but once again, the waiter was nowhere to be found once the food came out and I would have loved some parmesan and red pepper flakes to top my pizza.  I think the pizza actually would have been better without the shrimp, either as a veggie pizza or perhaps with chicken instead. We were eventually able to flag the waiter down for our toppings, but I had already eaten a slice and half before that.  My friend ordered the Alva, which came with salami, tomato, mozzarella and pesto.  Though I didn't get to sample any of her pizza, from what she said, it sounded delicious. 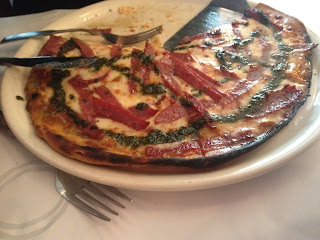 We got our leftovers wrapped up, but the waiter took more than a few minutes to bring them back, and then forgot to bring my friend's pizza.  Overall, it was an exhausting and far from a relaxing afternoon.  For the price of the food, I expected a much better experience.  I don't recall having such a negative experience in the past, so I will give them another try, but I would like to see them better staffed on a busy Saturday afternoon.

Not all of our dining experiences this weekend were so negative.  Saturday night we went out to  Il Capuccino restaurant in Sag Harbor, NY.  It's been a favorite restaurant of mine since I was a small child, and it definitely did not disappoint this weekend.  I got the Salmon Capuccino, which was perfectly cooked grilled salmon in a creamy sauce.  One of the best parts of the restaurant is their garlic knots, which are brought to the table instead of a traditional bread basket.  These garlic knots are to die for, and have ruined all other garlic knots in the world for me.  I'd consider making the drive out to Sag Harbor every weekend just to have these garlic knots.

We also tried out the new shop Papalajefa in Sag Harbor.  I was hesitant to try it at first, as it had taken over my (second) favorite ice cream shop in the Hamptons, but I decided I had to find out what this new store was.  The shop describes itself as "gourmet to-go" and has many European-inspired dishes.  My friend got the Croque Monsieur, a popular French sandwich with gruyere cheese and ham.  I got the Parma Cotto, a ham and cheese sandwich on focaccia bread.  The service was extremely friendly and helpful, and allowed us to go sit outside on one of the benches while our food was being prepared and then brought out to us when it was ready.  I feel as though this sort of hospitality is what really makes a restaurant special, and I hope that Papalajefa sees much success in the future.  I definitely recommend giving them a try for a casual, take-out meal.