Last night I tried Rosie's Wine Bar for the first time.  I've passed by this bar/restaurant hundreds of times and it always seems to be very busy, so I wanted to try it out.  To start, we ordered a bottle of white wine.  They had quite a selection, which I guess is not at all surprising considering it's a wine bar.  For an appetizer we ordered the baked brie with raspberry preserves.  The baked brie was served on a bed of lettuce with the raspberry preserves on the side.  The brie was wrapped in a very flaky, buttery puff pastry.  While the pastry itself was delicious, it did make it more difficult to taste the brie, which was a little disappointing.  I love the taste of warm brie, so I wish that there had been a better brie to puff pastry ratio.  I did like, however, that the preserves were on the side so I could control how much raspberry I had with each bite.  The presentation could also use a little improvement, as the lettuce was a little bit wilted and didn't exactly match the dish. 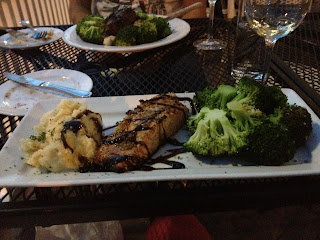 For an entree I ordered the broiled salmon (have you noticed a trend with my dish choices? I'm working on trying some non-fish dishes for my next few blogs, don't worry!)  The salmon was cooked to perfection so that it melted in my mouth.  It was garlic crusted with some sort of sweet glaze; the perfect balance of sweet and salty.  It came with sides of mashed potatoes and broccoli.  Both sides lacked flavor as the broccoli was simply steamed, though it was very fresh and delicious.  Additionally, the mashed potatoes were a little lumpy for my taste, I'm a bigger fan of the creamy variety of mashed potatoes.  My boyfriend ordered the bacon wrapped pork.  His dish was covered in an Asian glaze and was an extremely sweet dish.  His dish was also served with mashed potatoes and broccoli (though he opted for broccoli instead of spinach, so I suppose it's possible to swap out the sides on any dish).  From the few bites I had of his dish, I thought it was delicious, though perhaps a little too sweet for me to have had for an entire meal. 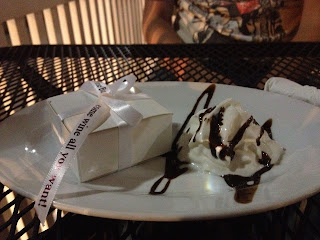 We were stuffed by the time dessert came around, but decided to order something anyway.  We got the assorted chocolates.  The dessert was presented in a small white box with a ribbon on it that had 5 pieces of chocolate in it: two milk, two dark and one white.  On the side there was a pile of whipped cream with chocolate syrup drizzled on it.  The dessert was a perfect sampling of something sweet for after dinner.  I can also imagine that it would be great to order for a couple people meeting up for late night drinks.

I greatly enjoyed the ambiance of Rosie's.  We chose to sit outside, but as it is located on a busy street, the occasional passing motorcycle or bus could be a bit distracting, but overall didn't ruin the evening.  Also, the menu contained quite a few appetizer and dessert options that are perfect light options to snack on when meeting up for drinks.  There seemed to be only one or two waiters for a rather busy restaurant, but I never felt neglected by the staff.  Someone was constantly walking by to check on us.  The food, drinks and atmosphere were all wonderful, and I plan to come back many more times!