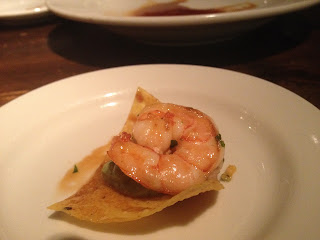 Last week I visited the Stage House Tavern in Scotch Plains, NJ.  The restaurant is split into two portions: the laid-back patio features BBQ, which is rumored to be free though we did not have the pleasure of exploring this option, and the interior fine-dining room.  We chose to sit inside as we were looking for a nice, sit-down dinner.  As an appetizer, my boyfriend and I split the sauteed shrimp.  The plate came with five homemade tortilla chips each drizzled with a soy caramel sauce, dabbed with guacamole and a sauteed piece of shrimp.  The caramel soy sauce was the strongest flavor of the whole dish and was delicious on the first tortilla, but by the second one, the flavor became overpowering to the point that my boyfriend and I ended up not being able to finish the last one.  It was a great appetizer, but I feel that it would have been better split among a few more people.

For my entree I had the grilled salmon with roasted asparagus and shrimp risotto.  The salmon was marinated in a dijon dill butter sauce which really made the salmon melt in your mouth.  The salmon was cooked perfectly so that the fish flaked away easily with a fork.  The shrimp risotto was also very well cooked with just the right amount of flavor.  Risotto can have the tendency to absorb strong flavors and I was afraid that the shrimp and salmon would be a little too much together, but it was just the right balance.  I wouldn't say that the food was a generous portion for the price, but the quality of the dish certainly makes up for that.

I would definitely recommend Stage House for anyone looking for a nice, well-cooked meal in a pleasant environment.  I definitely look forward to trying the BBQ next time I go!