Tonight my boyfriend and I visited Lola Latin Bistro in Metuchen, NJ.  I had been here only once before and really enjoyed my visit, so I was looking forward to another night of delicious and unusual food.  Our trip got off to a rocky start, as we walked in at 6:30 without a reservation and were told there was no way they could seat us unless we sat outside.  This wasn't an issue for us as it was a nice day out, but I definitely could have done without the attitude from the hostess. 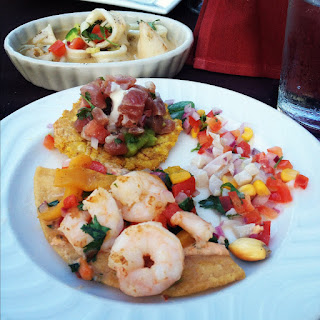 The menu is split into three sections, Tapas, Entradas de Ensaladas and Platos Fuertes.  My boyfriend and I made the decision to order a few plates from the Tapas and Entradas de Ensaladas sections and split them.  We ordered the tuna tartar, which was a special of the evening, the ceviche, taquitos camarones and calamar.  The tuna tartar special was my favorite by far.  The dish came with three fried plantain chips, each adorned with a dab of guacamole and tuna tartar dressed in cilantro and lime.  I'd never tried ceviche before and was pleasantly surprised.  The dish came with ceviche mixed with corn, tomatoes, peppers and onions.  The citrus flavor was a little overwhelming at first, but I definitely adapted to the flavor and grew to enjoy it.  The taquitos camarones came with several homemade tortilla chips, sauteed shrimp and a mango drizzle.  I had tried the taquitos camarones before, and absolutely fell in love with them.  The homemade tortilla chip was perfect and the shrimp was very well flavored.  My least favorite of all the dishes was the calamar.  Though the calamari was soaking in a jalapeno broth, it didn't seem to absorb much of the flavor.  The calamari was difficult to chew and essentially lacked any real taste.

After finishing all our tapas and appetizers, my boyfriend and I were very near full, but afraid we would become hungry again within a few hours.  We opted to order and entree and split it.  We ordered the Rigatoni con Pollo.  The entree took quite awhile to come out after we ordered it, but we were very happy with the meal even after our long wait.  The dish consisted of rigatoni with mushrooms, peppers, spicy sausage and chicken all covered in a tomato sauce.  The rigatoni and sauce itself was rather sweet, but went very nicely with the spicy sausage.  The two flavors really complemented each other.

I had yet another great experience at Lola, that could have only been improved by better wait service.  There were several occasions where we did not see our waiter for 20 minutes or more, and it was difficult to flag him down to get and pay the check.  One of my biggest pet peeves at a restaurant is poor service, and while the service definitely could have been much more efficient it didn't take away from my overall experience too much.