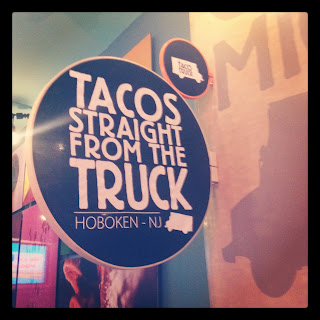 This past Sunday I made a trip into Hoboken to visit my sister.  Though we were enjoying stuffing our faces with chips, salsa, cheese and crackers all afternoon, what I was really craving was a fish taco.  We decided to go for a stroll around Hoboken, and stopped in at The Taco Truck on Newark Street to see if they had any fish tacos to satisfy my craving.


The menu offered up two kinds of fish tacos, Pescado, made with crispy catfish, and Camaron San Felipe, made with shrimp.  Most of the tacos on the menu cost $4.50 for an order of 2 tacos.  The fish tacos are, understandably, more expensive at $5, however I was very disappointed to learn that the Pescado order only comes with one taco.  Because of this (i.e. my gluttony and frugality) I opted for the Camaron San Felipe.

The tacos were ready pretty quickly, though we did get there during a lull; the line was out the door by the time we left.  The Camaron San Felipe tacos were absolutely delicious.  They came wrapped in two flour tortillas, and coated in green salsa (tomatillo, cilantro and avocado.) The cilantro flavor definitely overpowered that of the avocado, but as a big fan of cilantro I didn't mind that.  The shrimp were also very nicely flavored with an adobo seasoning, which complemented the green salsa.  Overall, I greatly enjoyed the tacos, however, I do have a couple of things I wish were different.

First, I would have liked if there was a hard shell option for the taco.  I understand that this business started off as a food truck and therefore they have limited capacity in terms of what they can offer on the truck, but I would I have liked to see this option in the storefront version.  I'm a big fan of hard shell tacos, as I know many others are, and for me it can really make or break a taco.  I would have also settled for a crisped-up soft tortilla, just to add that extra crunch.  The lack of a hard shell didn't ruin these tacos, as they were flavorful enough on their own, but it is something that would have made them ideal.  Secondly, I wish the Pescado tacos matched the servings of the other tacos.  Perhaps I missed out by not ordering them just because of the serving size, but I couldn't justify paying $5 for a single taco.  I'd be willing to pay a few extra dollars (maybe $6? even $7?) just to have the order consist of two tacos.  Maybe on my next trip there I'll bite the bullet and try it because I really do think they sound delicious.

These tacos absolutely satisfied my craving and I'm sure I'll be going back sometime soon.  There are trucks that travel around Jersey City, Hoboken, and Newark, as well as ones in Boston and the New York Highline.  Click here for more information about The Taco Truck, its menu and its locations.